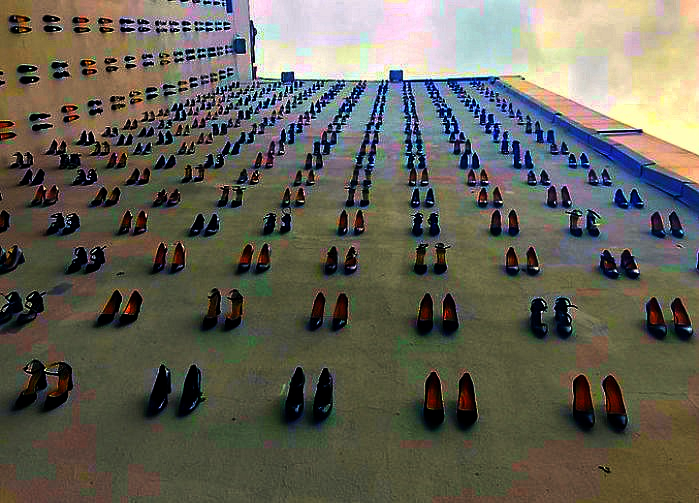 It’s difficult to wrap our minds around the fact that, in this day and age, domestic abuse can still exist. But it does. It’s alive and well across all cultures, religions and countries.

We still too often hear too many stories about domestic violence against women from around every corner of the world, and it’s one of the most common reasons for violent deaths among women.

In Turkey, there’s a haunting memorial that commemorates 440 women killed by their own husbands last year alone. The art installation is set up in a central area of Istanbul and will remain on display for six months.

About 40% of women there have suffered from domestic violence. In pursuit of bringing awareness to this problem, an artist came up with the idea of a monument no one could overlook. He chose high heels as a symbol of feminine power and independence that he wishes all women possessed.

In some areas of Turkey, there’s a tradition of placing a person’s shoes outside after they pass. The artist believes that, since knowledge is power, it’s important to place this important problem under a spotlight so that it can be addressed.

A recent months’-long Maclean’s investigation into intimate-partner violence reveals how systems, politicians and people have failed women and girls.

The investigation, which included dozens of interviews with front-line workers, lawyers, police, government officials and academics, found a response mechanism structured to fail – a lack of data, inconsistent record-keeping, systemic disconnects, lack of accountability and failure of political will.

But an examination of provincial and international systems, as well as anecdotal reports and new literature, reveal an underlying lack of concern for the human rights and safety of women and children. The courts remain shadowed by “coverture” – the archaic legal status that saw a wife subsumed in her husband’s identity. Public perceptions reflect entrenched cultural stereotypes about marriage and relationships, including the notion that controlling and violent behaviour is part of the romantic “fairy tale.”

The complex topic of intimate-partner violence is one of renewed urgency in Canada. National rates of homicide, domestic violence and dating violence have decreased since 2009, but recent spikes in domestic homicide have experts concerned we could be reaching an “epidemic level”.

But it’s impossible to calculate the number of women and girls experiencing violence at the hands of an intimate partner, spouse or relative. The majority – more than 80%, according to one StatsCan estimate – go unreported.

There’s no one magic solution to help solve this serious problem. But openly talking about it and highlighting the harsh statistics is a great starting point to a cultural shift in how we view and address this problem before it turns tragic. Awareness gets people talking – showing women they have support and abusive men that there’s no excuse for their violent actions.